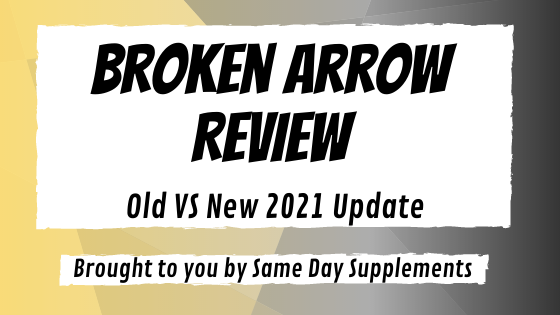 Trying to find a new pre workout can be difficult. Tons of options, crazy ingredient names, proprietary blends, a whole lot of confusion. But, that’s where we come in to let you know what’s new and worth trying. In this blog, we’re going over Broken Arrow Pre Workout, which just recently had a formula revision. We’re going to break down the formula, compare it to the old, let you know if it’s an improvement, and most importantly, tell you if this is a good pre workout for you. 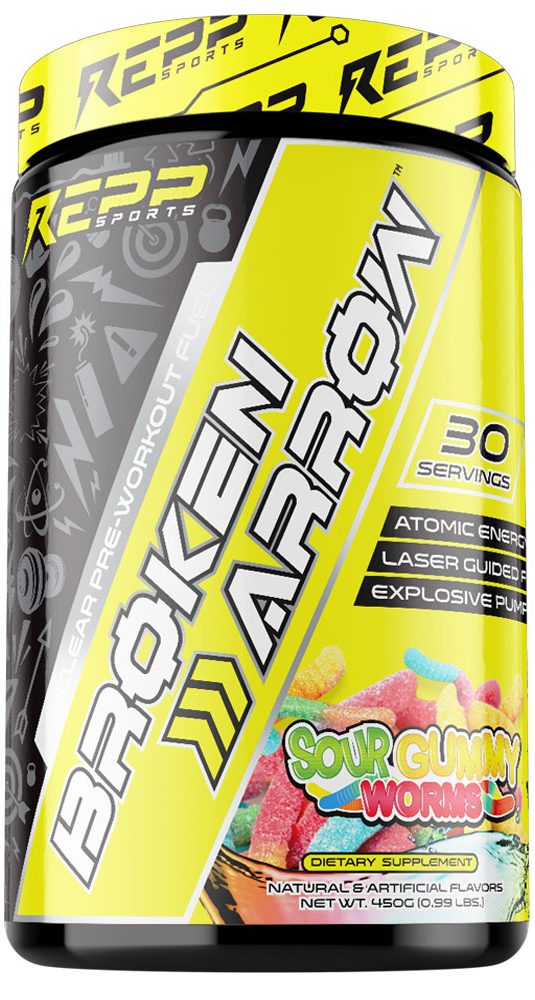 Broken Arrow from Repp Sports is a high stimulant pre workout that promotes every aspect of a great workout. From the focus ingredients to the endurance and pump promoting ingredients, this pre workout has your gym hit covered. Next to their fat burner Raze and the newly released Phenibut, this new version of Broken Arrow has quickly become a popular product from Repp Sports. 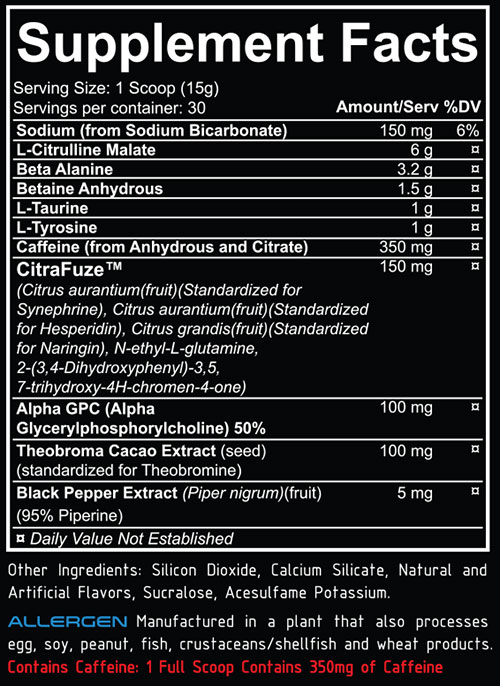 Diving straight into the label, you’ll see some common and classic ingredients. But, it should be noted that Broken Arrow Features a fully disclosed label. Meaning, you know exactly how much of each ingredient is in this formula. We love seeing this from a brand because it allows us to tell you if ingredients are at clinical dosages. Which helps with recommending products and comparing them.

Our first listed ingredient is L-Citrulline Malate at 6 grams. This is a pretty good dose for L-Citrulline Malate, generally you’ll want to aim for a dose between 6-8 grams and L-Citrulline Malate is more researched than L-Citrulline alone. What this ingredient does is aid in improving nitric oxide metabolism, which may aid in enhancing exercise performance. In fact, one study found that a single dose (8 grams) was able to improve work capacity (number of repetitions) and it does so without altering blood lactate, blood pressure, or heart rate. (1) However, it may not aid in muscle recovery. (2)

Next, we have Beta Alanine at 3.2 grams, which is on the lower end of the clinical dose range (2-5 grams) (3). But, this is perfect for individuals who aren’t fond of the tingling sensation (paraesthesia) Beta Alanine can produce. Similarly to L-Citrulline Malate, Beta-Alanine can aid in exercise performance. It does so by reducing muscular fatigue and improving work capacity. Going in deeper, Beta Alanine can increase carnosine levels, where carnosine acts like a buffer against muscle acidosis. This reduces the acidity (the burn) in muscles during high-intensity exercises and allows you to increase reps or weight. (4) There is also evidence that Beta-Alanine is more effective in older adults. (5)

Following Beta Alanine, we have another nitric oxide promoting ingredient, Betaine Anhydrous at 1.5 grams. This dose is considered active, but only minimally. Generally, Betaine dosed between 2.5-6 grams are considered to be more effective. However, taking into account Betaine is among other exercise performance enhancers like the ingredients above, it may not need to be dosed higher. Interestingly, in addition to aiding in work capacity and power output (not strength), Betaine may also improve body composition and reduce fat mass. (6,7)

Our next ingredient, L-Taurine, is noted as a “wonder molecule” due to all the functions it has in our body. In Broken Arrow, it’s dosed at 1 gram, which is a good dose for this ingredient (clinical dose range .5-2 grams). L-Taurine is actually a conditionally essential amino acid. Meaning, your body can produce this amino acid, but there are times you may need to supplement it. As for what it does, there’s a lot. Taurine plays a role in many bodily functions like maintaining hydration, digestion, supporting central nervous system (CNS) functions, and even may aid in regulating your immune system. (8)

So how does it help in the gym?

Taurine may aid in protecting muscles from cell damage and oxidative stress, while also removing waste products that lead to muscle fatigue. (9)

Additionally, Taurine may be beneficial as a therapeutic agent. Research indicates that it may bind to GABA receptors in the brain and result in calming (inhibiting) your CNS. (10) This is a complex interaction and is not well defined. However, some researchers indicate it may be beneficial for individuals with neuronal hyperexcitability. This is seen with cases of epilepsy. (11)

Similar to Taurine, L-Tyrosine also may play a role in the CNS. It is also an amino acid that the body can make on its own and in Broken Arrow it’s dosed at 1 gram. Where the clinical dose range is .5-2 grams. Unlike Taurine, Tyrosine is used by the body to make important things in the body. This includes dopamine, adrenaline and noradrenaline, and even hormones relating to metabolism. Tyrosine is thought to have some anti-stress properties, but this needs further research. However, research does indicate it’s benefits are limited to cognitive processes like memory. There currently isn’t evidence that Tyrosine benefits physical performance. (12,13,14)

Now comes the question you’ve been waiting for. Is Broken Arrow a good stimulant heavy pre workout? And we’d say yes! Broken Arrow contains 350mg of Caffeine. This translates to over 3 cups of coffee in one scoop. So stimulant-sensitive users be aware you may experience unfavorable side effects (like jitters) if you don’t assess your tolerance first. Caffeine is going to be the main source for energy promoting properties in this formula and at 350mg, we’d say it’s probably best to keep it that way. With Caffeine, you can expect an energy boost, enhanced focus, and you may notice some improvements to physical performance as well. (15)

This next ingredient blend is one of new additions to the formula (and one of our favorites). The CitraFuze blend contains:

Some of these ingredients may sound familiar, but not in the context of a pre workout. With the exception of Quercetin Hydrate, the other ingredients are common in fat burners.

So why include them in Broken Arrow?

Alpha GPC is another ingredient used to improve cognitive processes like memory. Normally, the dosage is between 300-600mg, but in Broken Arrow there is only 100mg. So whether or not you feel some enhancement of focus or mood at this dose will depend on if you have low levels of choline. (19) There would need to be more research on low doses of Alpha GPC to indicate its benefits.

Theobroma Cacao Extract is another stimulant source in Broken Arrow, but it doesn’t stimulate the CNS like Caffeine. It actually has medicinal purposes and is used to promote bronchodilation and vasodilation. This is the result of it’s stimulatory effects on smooth muscle. Some research indicates this ingredient is most effective at doses between .5-1 gram. Here, there is only 100mg. So we wouldn’t expect there to be a huge impact from this ingredient. (20,21)

Our final ingredient is Black Pepper Extract. This ingredient doesn’t really do anything on it’s own. But it is a source of piperine, which can inhibit enzymes that would attack/breakdown other molecules. And because of this, researchers believe it may aid in increasing the absorption rates of other ingredients. Though some researchers indicate a clinical dose of piperine to be around 20mg, we often see it at around 5mg in supplements. (22) So we won’t fault Broken Arrow on this ingredient.

Now that we’ve gone over the current formula, let’s take a look at how it compares to the old or original formula of Broken Arrow.

For starters there’s a lot that was left the same. The following ingredients were in the original formula and at the same dose:

However, this next list of ingredients are what were changed or removed:

First up we have Acetyl L-Carnitine, which was at 500mg.

This ingredient would have added to the cognitive improving properties like attention and focus. However, most studies on Acetyl L-Carnitine or ALC is dosed around .6-2.5 grams. So this dose was slightly under what we’d hope for. (23) Instead of ALC, we have the CitraFuze blend, which may improve cognitive functions, but without the specific doses for within the blend we wouldn’t be able to say for sure.

Next we have Alpha GPC, which was reduced from 300mg in the original formula to where it stands now at 100mg. So overall, if you liked Broken Arrow for as a “focus” pre workout, it may not hit your mark anymore.

The last change (probably the most notable) is the removal of 2-aminoisoheptane (DMHA). This ingredient would have brought the intensity of Broken Arrow to the stimulant heavy/stimulant junkie level. In the original formula Broken Arrow contained 150mg of DMHA (one of the highest mg from the pre workouts we carry). And on top of that it had the same 350mg of Caffeine. So definitely not for someone with a low tolerance to stimulants.

What To Expect From Broken Arrow in 2021

As we mentioned above, the new formula of Broken Arrow is more balanced. You have a good mix of ingredients to promote all aspects of a workout. That includes the energy, the pump, endurance, and even the focus/mood properties. We would love to hear how you feel about the new formula so, if you check it out make sure to leave a review!

This wraps up our post comparing the old and new version of Broken Arrow. Thank you for reading! And of course if you have any questions or have an idea for another post, you can send us an email here!