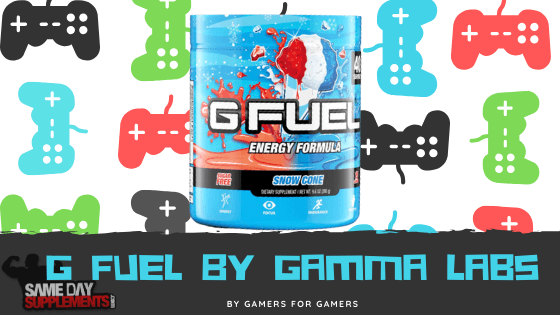 G Fuel is not a traditional pre workout; it’s not intended to give you a pump at the gym. But, it can give you awesome boost of energy for whatever you’re doing. For in and out of the gym. In fact, G Fuel is famed for being “for gamers, by gamers.”

What does that mean?

Well for starters, it contains a sugar free energy formula comprised of three complexes; an energy complex, a focus complex, and an antioxidant complex, with only 25 calories per serving. Promoting fast results†, no crash†, no jitters†, faster reaction time†, and improve concentration†.

For any gamers, you know how important those factors are when it’s getting late and you need a quick boost. Regular energy drinks are filled with sugar and typically lead to a hardcore crash an hour later. But not G Fuel.

When we first heard of G Fuel, we were pumped because we’re avid gamers here at Same Day Supplements, and we usually turn to coffee or energy drinks to get that boost of energy. With G Fuel, there is a healthier option with better results and that taste great. 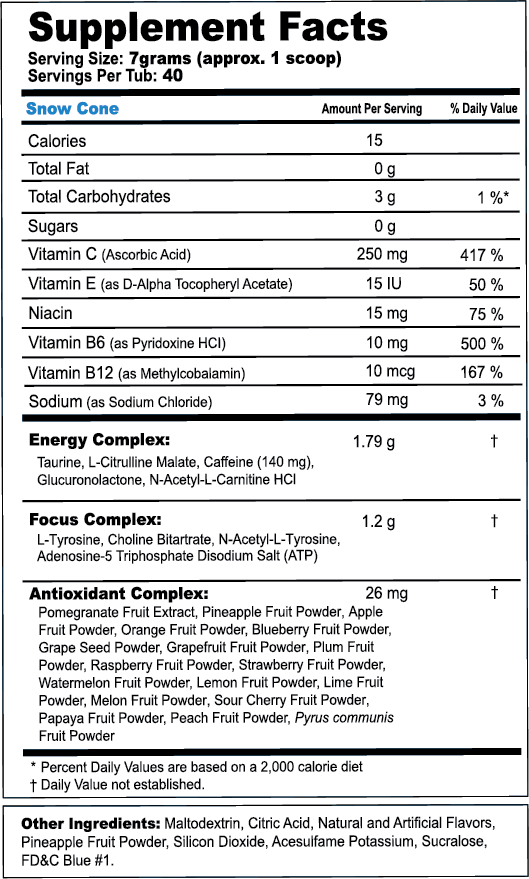 Now Lets Dive Into The Formula.

First thing we see on the label is the energy complex, which like all the other complexes, is a proprietary blend. This means we won’t be able to tell how much of each ingredient is in each blend (besides the caffeine).

Taurine itself won’t add to the energy in G Fuel, but when combined with caffeine it can aid in increasing mental performance (1). That means improved focus, concentration, memory, and even mood (2).

The Citrulline Malate is going to help boost your nitric oxide production, increase stamina, and reduce pain, which for the gym could help you push out an extra rep or two(3,4).

Caffeine is great for increasing/improving metabolism, appetite suppression, energy, mood and even cognitive functions like memory (5).

Glucuronolactone may have detoxification effects, including heart- and liver-protecting effects (6,7). But more research is need to analyze it’s performance enhancing effects.

While N-Acetyl-L-Carnitine HCl (ALCAR) is a form of carnitine, it serves a different purpose than the others, which are typically used for weight loss. ALCAR is often used for improving cognitive functions (8).

Tyrosine is an amino acid used to produce noradrenaline and dopamine. In addition to this, tyrosine also helps improve alertness, mood, and focus. These effects will carry over for N-Acetyl-L-Tyrosine (NAT) as well (9).

Choline Bitartrate has a bunch of potential benefits, but what it’s most recognized for is it’s role in cell structure, messaging, fat transport and metabolism, and DNA synthesis and nervous system maintenance. What this translates to is improved brain functions like memory and focus (10).

Antioxidant supplementation may reduce symptoms or indicators of oxidative stress (12). Oxidative stress is an imbalance between free radicals and antioxidants in your body. This imbalance can lead to damage to all components of cells, including protein, lipids and DNA (13).

What to Replace G Fuel With

At this time, we are not stocking G Fuel. But that doesn’t mean there isn’t other options available! Below is our list of tried-and-true pre workouts for non-workout purposes.

Noxipro is definently more of full pre workout. By this, we mean its full of more athletic performance enhancing ingredients. But, that doesn’t mean it can’t be great for gaming or other time when you need to sit and focus.

Out of all these ingredients, the only match we have to G Fuel is Caffeine. But unlike in G Fuel, the caffeine content in Noxipro isn’t indicated on the label. Rather, we have a full proprietary blend.

Our first ingredient in this blend is Beta-Alanine. Beta Alanine is a known buffering agent for lactic acid build up (the burning sensation we get from working out). When you supplement with Beta Alanine, you delay the onset of this build up, which allows you to continue training (14,15).

Next up, we have L-Arginine Alpha-Ketoglutarate (AAKG). This form of Arginine is thought to be better for absorption, but more research is need to support this. This ingredient is going to convert to nitric oxide, as a result we get an increase in blood flow and better pumps (16).

Our next ingredient is a something we haven’t seen in pre workouts before, Fibersol®-2. Fibersol®-2 is a digestion-resistant maltodextrin corn fiber. This ingredient can act as a low-calorie bulking agent and lower blood cholesterol and glucose levels (17).

After Fibersol®-2, we have Creatine Monohydrate. Creatine is a combination of 3 naturally occurring amino acids (L-Arginine, Glycine, and L-Methionine). Creatine can aid in increasing cellular ATP and cell hydration (18).

Higenamine is a beta-receptor agonist that is often compared to Ephedrine and Synephrine, which is also our next ingredient. But, Higenamine shows properties of a vasodilator, which leads to increased blood flow to the muscles. Unlike in most stimulants that are vaso-constricting (19).

Capsicum may improve and enhance physical endurance by increasing levels of IGF-1 and decreasing release of cortisol (21).

Alpha- Yohimbine or Rauwolscine  is known as a stereoisomer of Yohimbine. Because of this, it has very similar effects as yohimbine. Rauwolscine is an alpha-receptor antagonist, meaning it can block the action of the receptors responsible for stopping lipolysis (fat breakdown) (22,23).

Huperzia Serrata Club Moss Extract or Huperzine A, is a nootropic that increases the level of acetylcholine. As a result, mental alertness, focus, and concentration is increased (24). 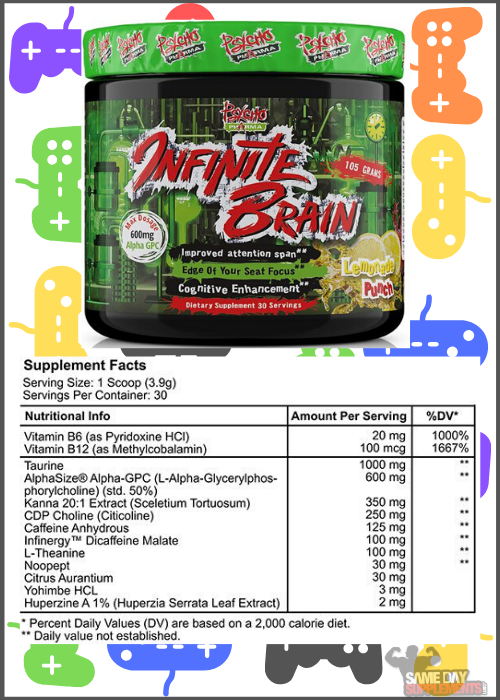 Infinite Brain is a little different from Noxipro, but more similar to G Fuel in function. As you can see on the label, Infinite Brain features a fully disclosed label. Based on the label, you can see it shares 3 ingredients to G Fuel: Taurine, Caffeine, and a version of Choline. Compared to Noxipro, it shares 5 ingredients: Infinergy™ , Caffeine, Citrus Aurantium (Synephrine), Yohimbe (Yohimbine), and Huperzine A.

Leaving the only new ingredients:

Alpha-GPC, aka Alpha-Glycerophospholine, contains choline at higher doses than found in food products. This nootropic may have cognitive-enhancing properties and may reduce the rate of cognitive decline in older adults (25).

Kanna Extract is a pretty new ingredient we’re seeing from Psycho Pharma. It may aid in boosting focus and mood (26,27).

Theanine is an anti-stress amino acid, often noted as a promoting a relaxation without sedation effect. But, when combined with Caffeine, there may be a synergistic effect. Research suggests that this combo may promote heightened focus, awareness, and energy (28).

Noopept has been famed as a smart drug, but it also may contains neuroprotective properties. It can aid in boosting cognition; including focus, attention, memory and mood (29) 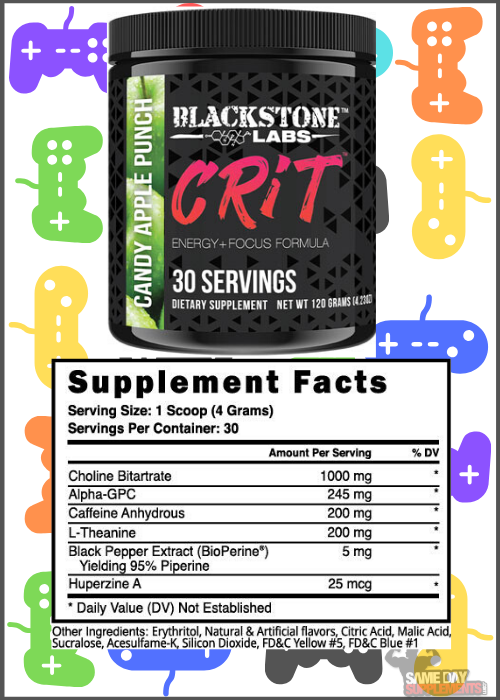 Crit is another product very similar in function to G Fuel. As you can see by its simpler label, it’s not going to best pre workout. Rather it’s better for an everyday boost of energy. Whether that be for the gym, work, class, or gaming. When you compare to G Fuel, there are 2 ingredients they share: Choline and Caffeine. But when comparing to Noxipro, there are only 2 ingredients: Caffeine and Huperzine A. Compared to Infinite Brain, 5 ingredients are shared: Choline, Alpha GPC, Caffeine, L-Theanine, and Huperzine A.

Bioperine may increase the bioavailability of the other ingredients within this formula. But also may promote thermogenesis through its own thermogenic properties (30).

That’s the Same Day Supplements review of G Fuel. Of course if you’re not a gamer you could always use it as a healthier alternative to the other sugar filled energy drinks.