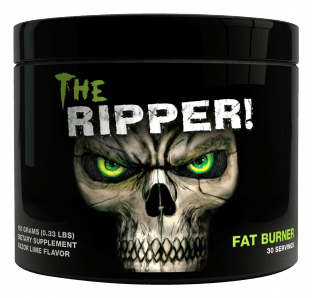 What is it? Well it’s a fat burner in powdered form. So no popping pills all day. Take a serving or two of this and that is your fat burner supplement! So let’s go right into the breakdown and talk about what’s inside the Ripper.

So we have Beta-Alanine. That aids in lean muscle mass by being a protected agent as well as helping BUILD new lean muscle mass. It also increases endurance and performance. So during your workout, you’re going to be able to last longer and perform better. We have a antioxidant and anti-aging properties to it – just on the properties of beta alanine.

We have Taurine, an amino acid which has several functions that it handles in the body. One that I like to point out is it reduces cramping. Which is something that can come into play when you take a fat burner.

We have Guarana extract, that’s a stimulant to keep your energy up throughout the day.

We have Raspberry Ketones which has actually been shown to decrease the size of fat cells by increasing fat metabolism.

Now we have some l-carnitine. L-carnitine helps with fat metabolism, energy metabolism and mitochondrial protection. So that’s a plus to have in any fat burner.

We have green coffee extract so that’s more like antioxidant, also known for some cognitive properties. It will enhance your mood as well as having stimulant properties.

You have a green tea extract.

Your EGCG that helps with cognitive support, overall brain health and it’s a great antioxidant.

Cinnamon bark extract, it regulates glucose metabolism. It helps with insulin sensitivity and is good for the metabolism as a whole.

Then we have olive leaf extract which is known for its benefits. Most importantly it lowers blood pressure, anti-inflammatory and also fights against cognitive disease and is antioxidant. Believe it or not there is some research to show that it even fights cancer.

So you can find Cobra labs the Ripper at Same Day Supplements retailing for $33.15 giving you 30 servings coming in a razor lime flavor.

So mixability 8 out of 10. This was with one scoop in 6 ounces of water.

It comes in one flavor razor lime so let’s give this a taste. Razor Lime is a little sweet but pretty good 8.5 out of 10.

So how would you take The Ripper Fat Burner?

Suggested use is about one scoop mixed with 6-8 ounces of water.

Start with one scoop about 30 minutes before breakfast just to assess tolerance and then one additional scoop can be added later on in the day about 5/6 hours later.

Try not to take it too close to bed so it doesn’t interfere with sleep since it is a stimulate.

What will you expect?

Well as I say in all my fat burner videos you should already have a diet and workout plan in place. You should be doing some form of calorie restriction because that is when a fat burner really has the most effect.