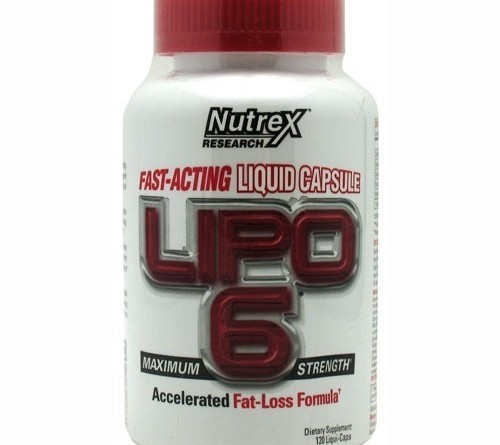 It’s a variation of Nutrex fat burners they have a whole line of Lipo-6. Let’s go over what makes this different and what’s inside this original Lipo-6!

So what’s inside of these capsules? Well we have for starters caffeine like every other stimulate.

We have Synephrine which is bitter orange extract which is comparable to a mild form of ephedrine, so increased metabolic rate, thermogenic aid fat burning in general.

We have synthetic Guggulsterones which has been shown to elevate your thyroid hormones has your T3 and T4 hormones. And that’s what determines your metabolic rate and how many calories you burn throughout the day so that will increase your fat loss.

We also have bioperine which is known as Piperine, it doesn’t do anything by itself except for acting as a synergistic aid to increase the absorption of everything else im talking about.

And we have Yohimbine, it is an aphrodisiac, increases adrenaline and is just a great thermogenic aid.

So after all that I would give it an 8 out of 10, there are some things I would like to see in here like mood elevation support but overall it’s a decent fat burner.

Now How to Take It

The recommend use is 2 capsules 30 minutes before breakfast and 2 more in the afternoon.

I would say start with 2 a day first, assess your tolerance make sure that 2 more later on the day isn’t going to give you too much energy.

And don’t take it too close to bedtime this is a stimulant which means anti-sleep. You want a goodnight sleep you don’t want to be stuck up all night by taking this too late in the evening.

What should you expect?

I’m going to say this in every single fat burner video you watch because I want to get it through your heads.

You cannot take these and be lazy and lose weight, it’s not a miracle drug. If you go watch our fat burner overview video to get an idea what they’re designed to do.

But in a nutshell if you have your nutrition on point, you have some sort diet you’re following, you’re on a calorie deficit and you’re working out. Consistency is key as cliché as that saying is, that is when you introduced a fat burner and it will help.