Nutrex is bringing back their famous pre workout, Hemo Rage with an all new formula to help you kill it in the gym. I was fortunate enough to have theopportunity to try a beta sample sent straight from Nutrex themselves. Many times when product is reformulated, it’s for the worst. Why fix what isn’t broken, right? After trying out the beta sample, I have to say the “Extreme Potency” warning labels still hold true for this new formula.

Let’s get the most obvious out of the way; there is no DMAA in the new formula of Hemo Rage.  This may disappoint some of us now that many pre workouts are being revived again with DMAA, but it shouldn’t. The new Hemo Rage is still a very potent pre workout. 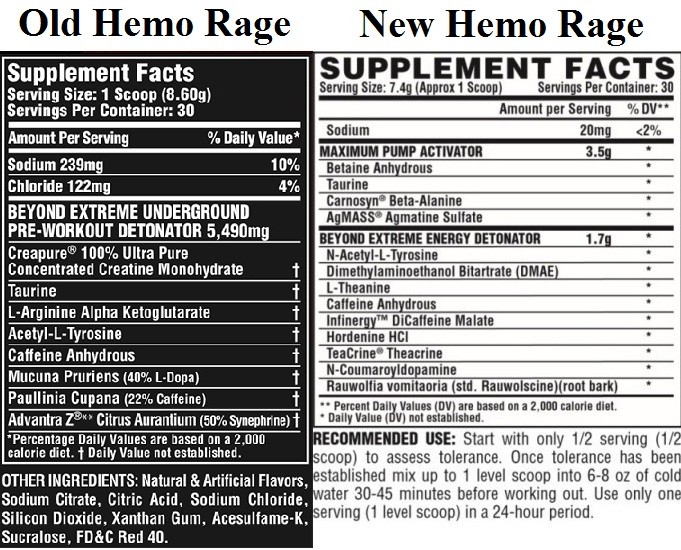 This is an organic compound similar to choline. DMAE is a nootropic and is associated with boosting cognitive function. This ingredient will help you with your focus and concentration in the gym.

A buffered version of caffeine that extends it’s half life. The benefit with DiCaffeine Malate is that the energy is longer lasting and there is less of a “crash” when the stimulant wears off.

This is another nootropic that is similar to naturally produced neurotransmitters in our body. It’s purpose is to enhance cognitive function and improve mood.

A compound similar to caffeine but with a reduced tolerance. In short, you can use hemo rage for longer periods of time before developing a tolerance.

This is a new ingredient emerging in the supplement world. N-Coumaroyldopamine is a plant chemical found in cocoa (chocolate!). It is a beta-2 agonist compound similar to clenbuterol but without any side effects. This is an ingredient that helps with lean muscle gains and fat loss.

This is a natural herb used for centuries in India to alleviate anxiety and control blood pressure. This is a form of yohimbine (alpha yohimbine) which is a stimulant and an alpha-2 agonist.  It has a longer half life than yohimbine which means you feel less of a crash when wearing off. This is ingredient is also known for it’s fat burning capabilities.

I was pretty excited to have the opportunity to beta test hemo rage before it is even available to the public. The label on the beta sample suggested to take half a scoop to assess tolerance which is exactly what I did for this review. The flavor I sampled was fruit punch and mixed very well into water. It tasted and smelled a little like coconut but it was still very enjoyable to drink.  I could feel the pre workout kicking in within 15 minutes after consuming which is pretty standard across all pre workouts. Even though Hemo Rage contains beta alanine, I did not get all tingly which is something I like. Nowadays,  pre workouts are jammed packed with beta alanine and I sometimes feel like I’m having an allergic reaction when my face and hands are tingling.

At about 30 minutes into my leg workout, I could feel the hemo rage in full effect. I had a tremendous amount of energy and I was sweating much more than I normally do. It felt pretty intense and I was starting to wonder if even half a scoop was too much for me.

I was full of energy and my heart was racing while I was on the leg press machine but my mind ironically felt relaxed and focused. I felt like I was in my own world where only myself and the weight I was lifting existed. It was a level of focus I haven’t really felt in a long time.  I attribute this to the nootropic ingredients Nutrex included in this new formula.

So far so good.

My workout was going great and I was starting to wonder about the after effects and whether or not I will be able to function for the rest of the day. To my surprise, I did not crash at all. I felt physically tired from my workout but I was still able work and function which is a major plus for me. A lot stim heavy pre workouts leave me feeling sluggish after the stimulants wear off but I did not have that experience with Hemo Rage.

This is a solid pre workout.  I only took half a scoop but the energy and focus was intense and most importantly I did not crash while on Hemo Rage. I’d recommend this pre workout to anyone from the beginner to the seasoned bodybuilder. As a reminder, start with half a scoop first! It will more likely be enough for your energy needs.

The numbers speak for themselves. If you haven’t purchase this yet, this has to be your next pre workout to try.