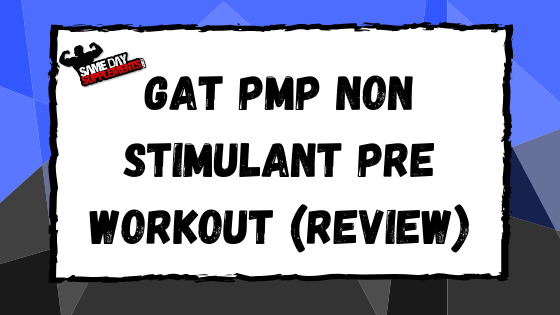 When you go to the gym, what do you expect after a great workout? Results! So when it comes to selecting a pre workout, you’re going to want something that can deliver the same. In this post, we’re covering GAT PMP, including:

To start things off lets go over what PMP stands for, Peak Muscle Performance. The name alone carries a lot of expectation for PMP and when you have a pre workout like Nitraflex to compete with– is there even a chance?

The good news is that PMP isn’t meant to stack up against Nitraflex. In fact, most consumers stack the pre workouts together. Why? Because PMP features stimulant free flavors. So when stacking with Nitraflex (or another pre workout) you get the energy, the focus, and even more pumps!

When you compare Nitraflex to PMP, you can see they do share some ingredients:

Outside of it’s role as B-Vitamin (there are many), Niacin does aid workouts, which is why it’s in almost every pre workout. It can actually reduce blood pressure (1) and some studies are evaluating its effectiveness as a vasodialator (2).

Citrulline is a common and effective ingredient for increasing blood flow to muscles via vasodialation (3). Where vasodilation refers to the widening of arteries or veins. However, in both Nitraflex and PMP, we see two types of Citrulline.

First, we have the regular L-Citrulline, then we have L-Citrulline Malate. So what’s the difference?

Because they are both forms of Citrulline, they are both going to promote blood flow. So the real test here is, which is more effective at doing so.

Right off the bat we’ll state that the research comparing these ingredients isn’t very point blank. In fact, its typically up for debate and interpretation by experts in the industry. But, the growing consensus is that because malic acid in itself (represented as Malate) may improve stamina and reduce pain from inflammation (4), L-Citrulline Malate may offer more than just L-Citrulline†.

Similarly to Citrulline, we have to forms of Arginine. But, before we can dive into this comparison, there’s more to discuss on Citrulline. After Citrulline is consumed, some is converted to another amino acid, Arginine.

Where Arginine, is then converted to Nitric Oxide. As a result, we have the glorious pumps and blood flow we want (5). BUT! What makes Citrulline and Arginine so interesting is that, Citrulline may increase Arginine levels better than consuming Arginine alone (6).

When it comes to L-Arginine Malate VS AAKG, there are claims that AAKG may be better absorption†. However there is not enough research comparing these two ingredients to support this.

Beta Alanine roles in a pre workout and benefits have been well established through continuous research. However as an overview, Beta Alanine buffers away lactic acid. As you workout, lactic acid begins to build up in our muscles, causing the “burn”. When you supplement with Beta Alanine, you delay the onset of this build up, allow you to continue training (7,8).

Yet, lactic acid build up may not be causing muscle fatigue, like commonly believed. Instead, lactate can be used by the mitochondria (powerhouse of the cell) for energy. Additionally, it may also be beneficial for muscle growth (9).

N-Acetyl-L-Tyrosine is another common ingredient in found in pre workouts. It’s used here to promote improved cognition. That includes: attention, focus, memory, and even mood. Interestingly, researchers have found that these effects may be more prominent in individuals who are sensitive to stressors (10).

Theanine is another anti-stress amino acid, often noted as a relaxation without sedation. But, when combined with Caffeine, there may be a synergistic effect. Research suggests that this combination may promote heightened focus, awareness, and energy (11).

Resverstrol is a plant compound that acts like an antioxidant in the body (12). There are a bunch of potential benefits from Resverstrol, such as easing joint pain (13).

Pterostilbene is another antioxidant, which is similar in structure to resveratrol (14). But, some researchers suggests that Pterostilbene may be better absorbed by the body†.

Caffeine is a central nervous system stimulant within the methylxanthine class. It works by binding to the receptor in the brain called the adenosine receptor. But, unlike adenosine, caffeine doesn’t slow down the cell. Instead, cells speed up.

Caffeine also causes the brain’s blood vessels to constrict. This is due to it blocking adenosine’s ability to open them up. Which is why it is sometimes referred to as a vaso-constrictor, like other stimulants (15).

DMAE Bitartrate is another cognitive booster. That means it can aid in increasing focus, attention, and some mood boosting effects (16).

Calcium fructoborate is a form of boron that could aid in naturally boosting testosterone (18).

This pre-workout is creatine free. Which is perfect for anyone trying to avoid the water retention and bloating.

Now if you’re looking for a pump-focused pre workout but wanted energy as well, the other flavors of PMP are a great option. The 525 mg you’re getting from the energetics blend will be more than enough to get your through your workout without being jittery.

This is a form of the BCAA amino acids L-Valine. L-Norvaline improves circulation and nitric oxide levels, which adds to the pump you feel in the gym (19).

Agmatine is a metabolite of L-Arginine. Research suggest it may govern nitric oxide (NO) synthesis, as well as working to properly regulate cellular energy. This makes agmatine sulfate a popular pump-inducing ingredient, but further research is needed on this ingredient (20,21).

Glycerol promotes the prevention of dehydration, improved exercise performance, and increased muscular pumps (22). However, because of how effective it is at attracting water, it does typically make products clump up.

Calcium lactate may be beneficial for promoting erogenic effects†, however more research is needed to support this.

While Acetyl L-Carnitine HCl (ALCAR) is a form of carnitine, it serves a different purpose than the other forms. ALCAR is often used for improving cognitive functions, like attention and focus (23).

PMP did not mix as well compared to Nitraflex, which is probably due to the added Glycerol monostearate. This ingredient is not very soluble in water. However, it was still above average compared to other pre workouts.

All flavors tasted great, but PMP had a sweeter taste than Nitraflex.

Let’s Look At The Reviews!

-“I like the Blue Raspberry flavor cause it’s stimulant free. So for the nights I don’t get to the gym till later in the evening, it’s perfect. I get to fulfill my workout and get a good night’s sleep. As far for the pump, I do feel stronger, like I can do more reps at a heavier weight or even try to max out. But I don’t personally get a huge, skin-tearing pump. The pump is there, but when stacked with like Nitraflex, you can’t ignore it.”
PMP Review By Andy

-“My boyfriend always used Nitraflex, where I was more of a C4 gal. But Whewww when I tried this, let me tell you I was bouncing off the walls! It was my best workout by far. And I will definitely be purchasing again. Also Same Day is great, can’t beat these deals.”
Nitraflex Review By Wendy 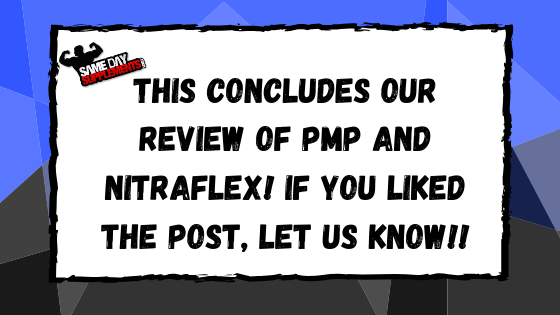 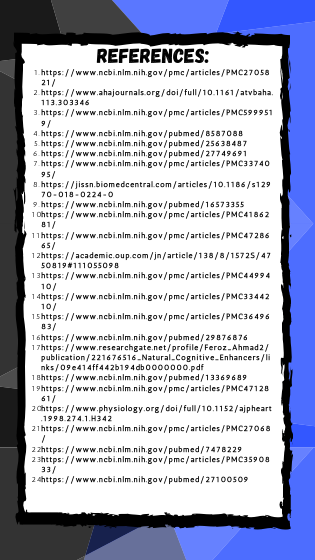