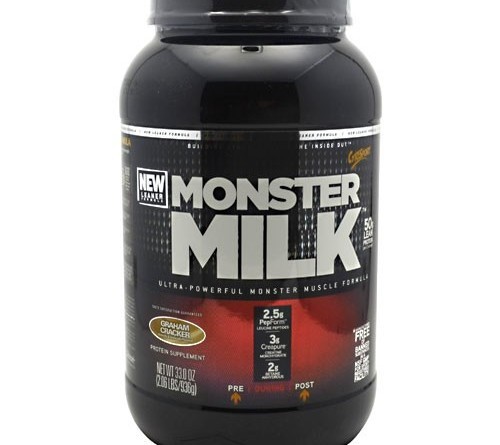 So what is it? Well it’s Cytosport’s protein powder, the Monster Milk and it separates itself from the rest of the pack by a few key things which we are about to go over in the Break Down.

This is for the chocolate flavored monster milk so keep in mind very subtle differences across each of the flavors, for the most part they’re all in the same ballpark.

So I like it right off the bat because I like my fat low as 3 g per scoop so that’s an average of most of the brands out there and I really like the protein with 25 g per scoop. Most range from 19 to 24 so it’s a little better than that. Of that 25 g of protein you are getting your sustained-release protein blend consisting of a milk protein concentrate, an isolate and a micellar casein. So that has you covered on the slow digesting part of it. We also have a rapid release protein blend which is your whey protein isolates basically, you have your concentrate in there as well. So you’re getting the slow-release aspect as well as the fast absorption aspect, which is good to see in a protein powder.

Some things worth noting is it has your Maltodextrin in it, so I see a practical use of this protein. When I’m running out of the gym and I’m going to work or I worked all day; I trained some clients, I do the videos, I’m constantly on the go, so sometimes I’ll don’t have a chance to make a full-blown shake. What I mean by that is I add oatmeal with fruits or some carbs in there to help with the post workout recovery because you do need a blend of carbs and proteins for the most part based on your nutritional goals of course. Generally speaking it’s good to have both in there. I like this because it gives me 13 g of carbs just by these two scoops. I threw it in a blender or I shake it up and I’m out. I always keep one of these on hand or one similar to this (one that has carbs in it) for those in and out scenarios.

It also has medium chain triglycerides in there which is what’s coming from your fat content. Which is good to see in there. It’s your healthy fat so nothing to really worry about in there.

I think it’s an awesome protein blend and to go into what else it has that makes it stand out… it has 7.5 g of leucine and we all know I love Leucine. It’s been shown to have the biggest effect on increasing muscle protein synthesis out of all the branch chained amino acids and amino acids in general.

It also has creatine in it so you don’t need to buy a separate creatine supplement.

It also has Betaine that’s been shown to increase muscle mass, strength levels as well. So that’s an awesome thing seen in there.

So 9 out of 10 for the breakdown based on what I’m reading here. I think they got you covered on all angles and then some.

Ok so I just want to point out the scoop is a little bigger than normal. I’m only going to do one scoop in a little less than 10 ounces of water. Mixability… good, so I just shook it up in my shaker cup and it came out pretty good so 8.5 out of 10 better than most out there.

Now for taste. Not bad, didn’t wow me so 8.5 at 10 for taste. I was hoping for a little more not going to lie but again not bad at all.