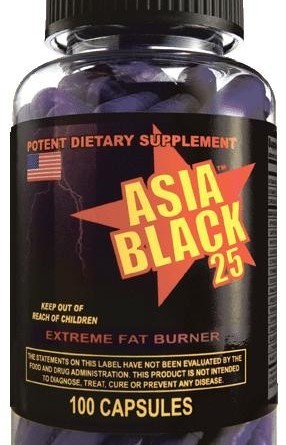 We’ll be talking about…

So what is it? Asia black 25 is an ephedra alternative fat burner. With that being said lets go right into the breakdown and see what’s inside this bad boy.

We have your vitamin B6 and B12 your chromium. Not going to go through each and every one of these ingredients we’ll be here all night. But chromium helps with glucose metabolism and insulin insensitivity.

You have your ephedra coming from ephedra viridis. That is a different part of the plant altogether than the ephedra that is currently banned and that is why this company is allowed to introduce this into the market. Doesn’t have a lot of ephedrine in it but it has the properties such as appetite suppressant which come in handy during a caloric deficit or during your cutting cycle.

You have bitter orange extract which is good because it produces some of the same chemicals that the real ephedrine used to produce in the body so it mimics those effects.

You have Yohimbe and Evodia they are going to help more with thermogenesis and increasing your metabolic rate.

You have ginseng, your green tea which I love green tea in a lot of different things.

I’m glad to see ginger root in there because a lot of the in fat burners I’ve taken in the past and I would get nauseous throughout the day and ginger root extract is going to help with that nausea.

And you have some type of cognitive support coming from your L tyrosine and even throw in some l-carnitine and which is supposed to help with metabolism.

So when should you be taking Asia Black 25?

Is this a miracle pill? Absolutely not, you’re not going to take this in a matter of a month of sitting on the couch and look amazing.

Will Asia Black 25 help? I think so and this is why.

You’re going to have a lot of energy from this. Your appetite is going to be a little less massive, especially if you work out a lot and have a big appetite that comes in handy. The more energy you have, the more you’re going to do the more you do, the more calories you burn. Simple as that.

The difference from the elite version and this is the elite has a couple more additive support and mood support.

So you can find Cloma Pharma Asia black 25 at Same Day Supplements retailing for $29.99 given you 100 caps.

That would give you 50 days worth. You’re not supposed to have more than 2 a day remember that.