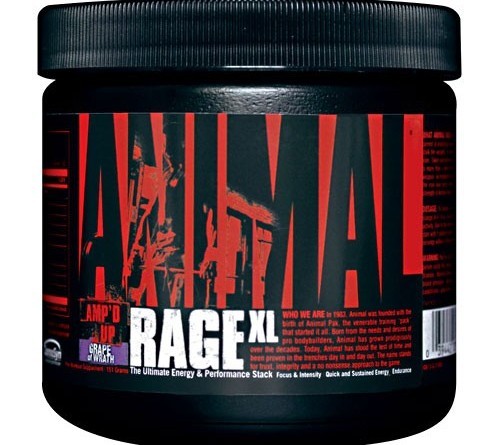 This is Universal’s Pre-Workout supplement!

This has four components to it all of which I like and I’m looking forward to trying out tonight in the gym.

First component is the Endurance and Performance Complex. You have your creatine monohydrate, best creatine hands down.

You have your CarnoSyn Beta-Alanine, it’s going to aid in your lean muscle mass production and also increasing the endurance.

You have your Citrulline Malate which reduces fatigue and also increases endurance and increases L-arginine production to the point where it beats supplementing with regular L-arginine itself.

You have some Taurine in there.

You have some Glucuronolactone, I can’t even pronounce that! Bottom line energy and alertness. There’s not much research on it, it’s a newer ingredient so let us know what you think when you’re taking it.

Up next is focus and intensity complex.

You have L-tyrosine, it has anti-stress benefits and increases alertness, of course focus.

You have your Choline Bitartrate which is a cognitive enhancer with even liver health enhancement properties to it.

You have your N-Acetyl-tyrosine. Same as L-tyrosine but it has some more science behind that. We’re not going to go over that.

Than you have B-Phenylethylamine, it’s a nootropic so a cognitive enhancer. It aids in the production of your happy hormones which are serotonin and dopamine.

You have your Rhodiola Rosea Root. It has been proven to reduce fatigue and exhaustion in prolonged exercise. It also as neuroprotective and anti-aging properties to it. So that’s awesome to have in a pre-workout.

You have Schizandra Berry, it’s an adaptogen which helps fight the bodies stresses and also has been shown to reduce anxiety and reduce cortisol levels.

Next up you have Cordyceps Sinensis basically that is an anti-aging and pro-vitality ingredient and has been shown to regulate testicular testosterone production and what guy doesn’t want that.

Alright so going into the Panax Ginseng it’s a mood immunity and cognition enhancer so again brain activity, your mood in general, your immunity, your health; all that will benefit.

Onto the Quick Energy Complex.

You have your caffeine, your coffee bean extract, your green tea extract and your Bacopa Monnieri. Now that is an cognitive enhancer, reduces anxiety and improves your memory formation so you can remember all of your awesome lifts in your previous workouts.

So I know it’s a long list but a lot of stuff in here you might not know so I wanted to make sure I at least touched on most of the them. Based on all this 9 out of 10 for ingredients.

You could find this at Same Day Supplements retailing for $24.29 giving you 30 servings, coming in grape, mango and lemon flavors.

I don’t really see anything right now, no chunks, no clubs, no residue, makes a clean mixture here. 9 out of 10 mixability.

Go right into taste. I can’t lie to you guys, I’ve had much better grape flavors so 6 out of 10 for taste. Again I’m going to the gym right now so I’m going to chug this down but it’s not terrible. It doesn’t make me gag but I don’t think you’d enjoys this as much as your other grape flavored supplements out there.

So I just finished up my work out as you’ll see in here I got through my overhead presses and went over to inclined barbell press. It was about 10 minutes for Kick-In factor. Really good kick-in factor, nice focus, as far as energy levels pretty good.

Today was a heavy shoulder movement and then followed by lighter weights, more volume for chest. What happened was I believe I might have strained something, not exactly sure where the pain was coming from. So what I recommend all of us doing is since this is a marathon not a Sprint, don’t push yourself to finish one workout when something like this happens. Take the time to recuperate and stretch, foam roll. It was a short workout so it’s hard to give it the effectiveness rating but from what I was able to complete in my workout,  7 out of 10 for effectiveness.